anatomy of a psychologist 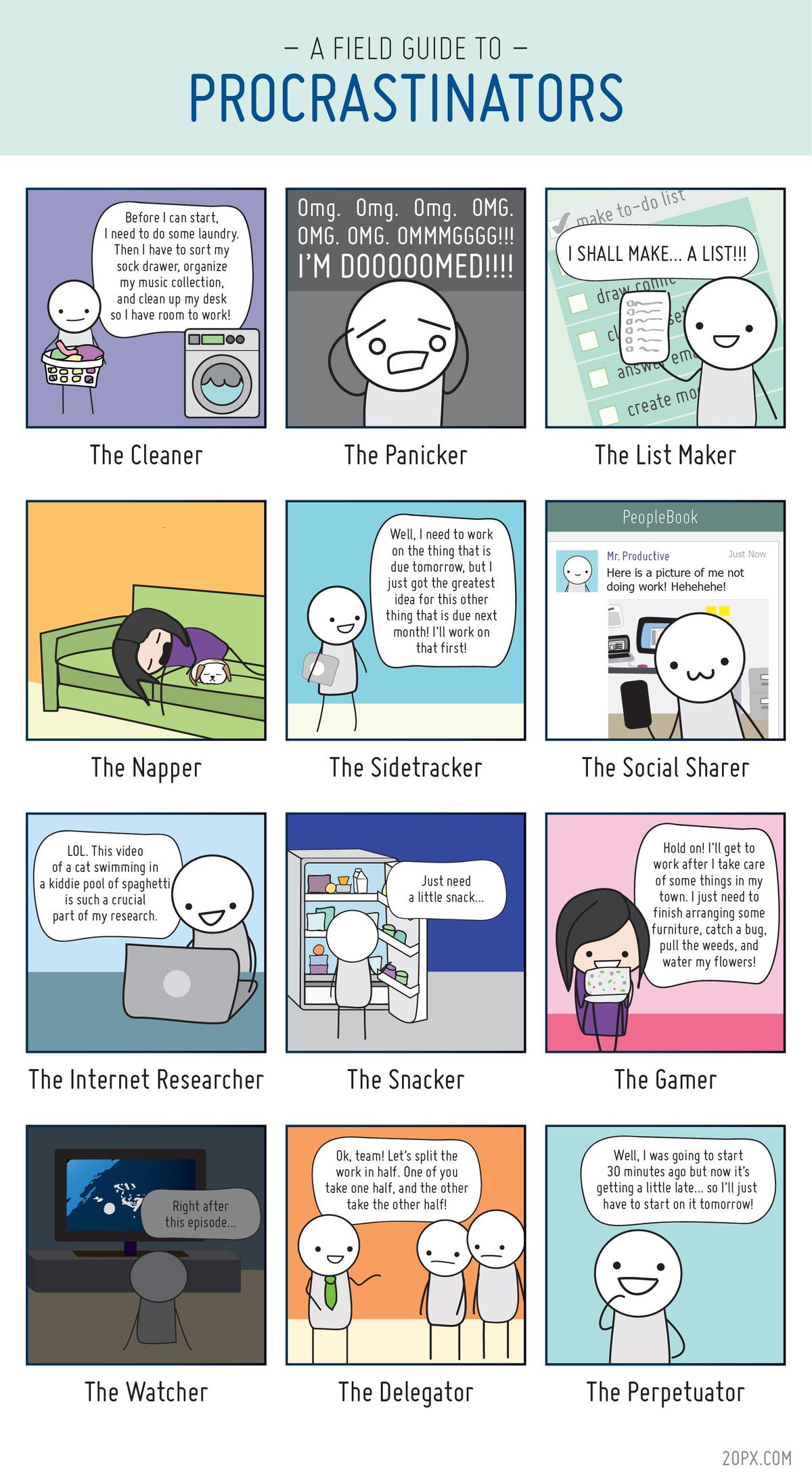 Do you start things and leave them half way?

Okay, so I loved the idea of writing a blog. I have a lot of interesting ideas in my head. My drafts section is brimming with half written posts. Despite all of that, there has been no post in the recent months. Did I lose my command over the language?

Did I get occupied with other things in my life? Well, yes. But was there truly no time to write at all?

I’ve been writing this for the past 10 days. Honestly, it’s really not about dedication. Because I swear, this is important to me. I think the problem is that it may be too important. Often, we start postponing tasks that hold actual value to us, because we fear the consequence of failure. Procrastination often stems from mixed or negative feelings about a certain task, where the individual might experience intimidation, fear of failure or a lack of passion.

After all it is easier to say “I didn’t do it or I didn’t have the time” than “I couldn’t do it or I failed.” Tice and Ferrari conducted a study on procrastination, where students were brought into a lab to do some math puzzles and either told that it would be a test on cognitive abilities or that it was just meaningless and for fun. They observed that all students who were chronic procrastinators delayed practicing the puzzle when told that it was a cognitive evaluation, and behaved no differently from non chronic procrastinators when it was meaningless and for fun. They concluded that procrastination was a self defeating behavior, wherein an individual would rather have people think that they lack effort than them lacking ability.

It can often be a coping mechanism where we avoid the task at hand, making it a much bigger deal in our head than it was. It could have started as a hurdle, but becomes a mountain by continued avoidance. As a result, a task that could have been an experience or become an achievement becomes something that needs to be overcome. 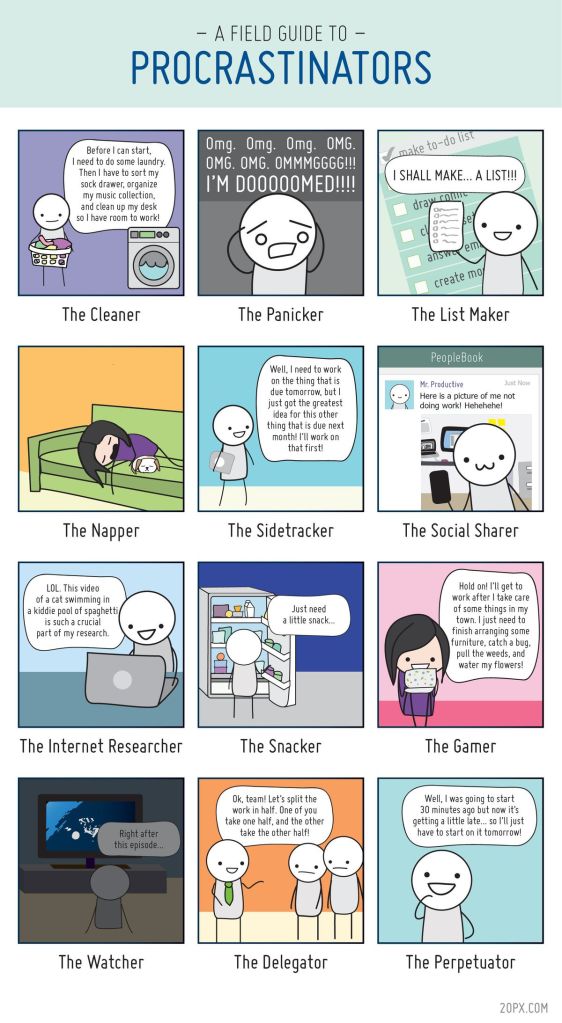 Regardless of why an individual procrastinates, everyone would agree that it has a price.  Tice and Baumeister found that procrastination was associated with depression, anxiety, low self esteem, stress and irrational beliefs. Yet, we all indulge in it. 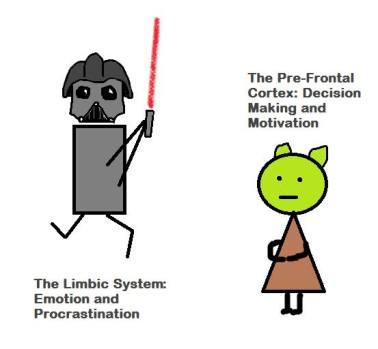 Breaking it down neuropsychologically, imagine the brain divided into two entities: the Limbic system (Darth Vader) and the Prefrontal cortex (Master Yoda). Drawing parallels to the epic space opera franchise, the Prefrontal Cortex, just like Master Yoda, is wise and makes decisions by assimilating information. But like any Jedi master, one must go and seek his advice. What I mean is that this part of the brain requires voluntary effort to function. And, it is what eventually forces us to complete a task.

The Limbic system on the other hand, is a dominant part of the brain that is responsible for mood and instinct, including the drive for survival and but not limited to the pleasure centre. In this situation, before any task is even began, there is a tussle between the two. Darth Vader, ruled by the need for immediate gratification of wants to increase positive feelings in the present, would attack master Yoda and his ideals. Master Yoda, on the other hand, has the strength and wisdom to, at times, sacrifice small positive feelings of the present for longer lasting positive feelings achieved by completion of the task at hand.

For example, Darth Vader would ask you to pause your assignment and watch a few funny videos because that’s more fun. While master Yoda would tell you to persist and push through the assignment so that you can watch an entire movie after you’re done. “Work do now harder play later”.

Procrastination occurs when Darth Vader defeats Yoda in a duel and the task at hand is postponed indefinitely. We all know the negative feelings associated with Darth Vader winning such a duel.

There are certain things that we can indulge in to support Yoda. After all, we all do promise ourselves that the next time we have a task at hand, we will do it the right way, wherein we won’t postpone it to level where the stress is so high that breathing is wasting time.

And like Abraham Lincoln said, “You cannot escape the responsibility of tomorrow by evading it today.”

5 thoughts on “Are you procrastinating?”

You are NOT alone, my friend.

Let’s resume control of our own lives.

So I had posted a poll on my story a few days ago; does self care feel like rebellion? 86% people voted yes! When you board a plane, the first thing they tell you during safety protocols is that ensure *you put your oxygen mask before you help someone else* This I thought was a really common example that reinforces how taking care of yourself isn’t a selfish act. It is protocol. It is crucial. If you are not of sound health mentally and physically, you can never help anyone else. Why I say this is because often times “self care” gets mixed up with “selfish”. A very negative adjective used in society. This is my small attempt at breaking the stigma. I repeat, there is NOTHING wrong in doing things just for yourself. Saying no and prioritising yourself. There is nothing wrong in thinking about what you need. So the next time you need some time off or you need to say no but feel that you might be selfish by saying that. You remind yourself, that you are equally, if not more, important.
Grief is a natural response to losing something or someone that is really important to you. And we have all lost a lot. Our lives are upside down, some of us have lost jobs, some of us have lost people that we dearly love... This is the first time in our lives that the entire world is grieving together. Our lives will never be the same again. “And once the storm is over, you won't remember how you made it through, how you managed to survive. You won't even be sure, whether the storm is really over. But one thing is certain. When you come out of the storm, you won't be the same person who walked in.” - Haruki Murakami
These are a few prompts that you can ask your self to begin the journey towards a more positive day! Let’s create short term goals of happiness to help through lockdown. Instead of worrying about the entire time period, break it down to today. How does today feel? What can be done to change how you feel? You have all the answers inside, you just need to start asking! Do what feels right to you. Take care of yourself. 🌻
Social media while being such a blessing can be such a curse as well. You have to take everything you see with a pinch of salt. You have to constantly remind yourself that you’re not getting to see the full picture. You’re only seeing what the other person wants you to see. I often get clients who get disturbed by how productive or successful or lucky or happy other people are based on what they see on social media. I always always tell them to remember the last beautifully orchestrated post they put up on Instagram whilst being sad, bored or unproductive. Whilst these platforms are amazing for connecting and staying informed. They also add a certain pressure of looking the best. Be it about your appearance or how you portray your life. Next time you feel bad about your life based on what you see about someone else’s, just remind yourself that you too try your hardest to look like the best version of yourself regardless of how true it may or may not be.
Your sense of self is not defined by how much you achieve. There is a difference between a sense of achievement and self esteem. The problem is that we often end up mixing the two given pressures that we put on ourselves and the pressures we get from outside. What I’m trying to say is, if one day you were not able to get everything done, or failed at what you were doing, you are not failure in life. You just failed at that particular thing. And this is not an indication to how good or bad you are as a person. This fine division is the start to a road towards a healthy sense of self, self worth and self esteem. So, repeat to yourself: I Am Enough. Repeat every single day till you completely believe it. 🌻
Anxiety replaces our inner dialogue with its own. It fills our mind with automatic negative intrusive thoughts that start governing how we feel, think and behave. The idea behind talking and sharing these thoughts is that • it helps get your fears out • when you hear yourself talk about your worries, you’re able to process them better. Things start making more sense the more you vocalise them. • people offer different perspectives • discussion helps validate and invalidate fears. The more you keep things inside, the more they grow. Reach out. It’s not as bad as anxiety says! 🌻